My Week In Baking 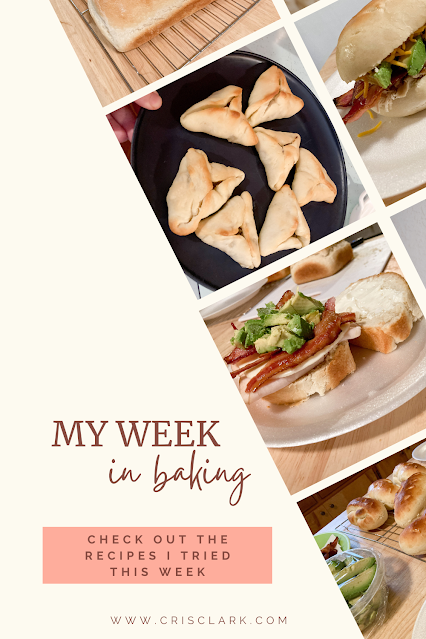 A quick roundup of the recipes I tried this week.
Who loves to bake? I enjoy baking and cooking but I am admittedly not super talented in this area. It is a part of homemaking that I am making a concentrated effort in though. This week I tried several recipes and I'm here to share them with you all! Some were successes, some were less so haha, so here we go! 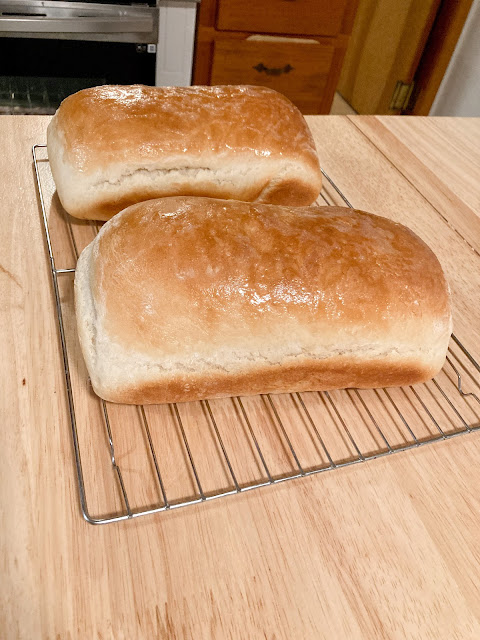 The recipe I followed can be found here: Basic Homemade White Bread
I made a few minor changes: I substituted one table spoon of sugar with a tablespoon of honey, and found that I only needed about 5 cups of flour to get the right consistency. 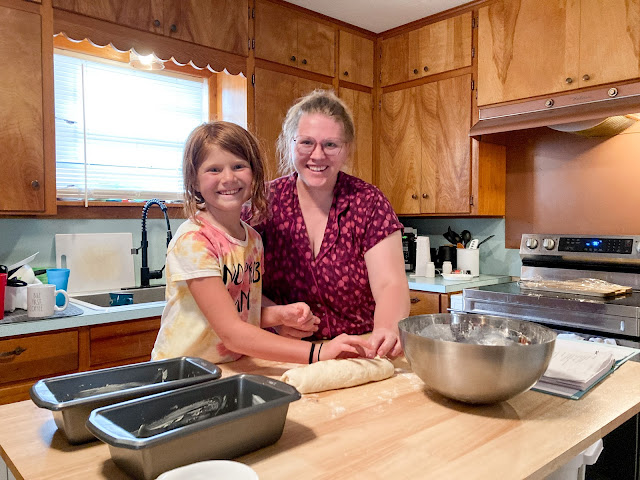 This recipe calls for a stand mixer, which I don't have. (Although trust me, after this week of baking, it is at the top of my birthday wish list!). You can easily make this bread without one, you just need to put in some good old fashioned elbow grease! I kneaded the dough by hand, and had several volunteers to join in the process. They thought it looked so fun! 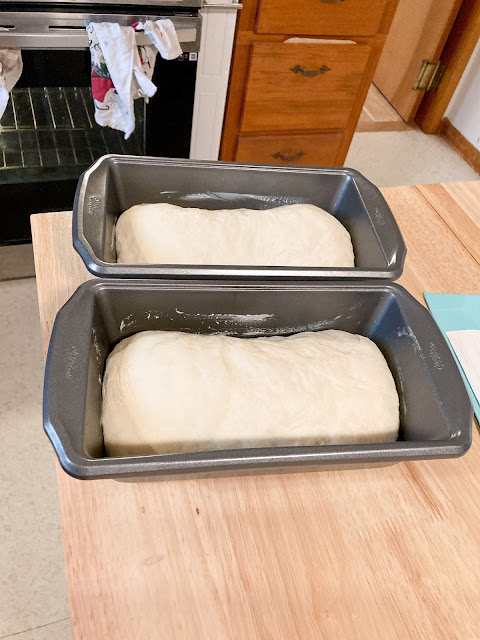 Here the dough is pictured ready to rise for the second time. I have a Samsung oven with a Bread Proof option that I found very helpful! Even though we had our AC blasting and fans going in the kitchen, the dough was able to rise just fine. 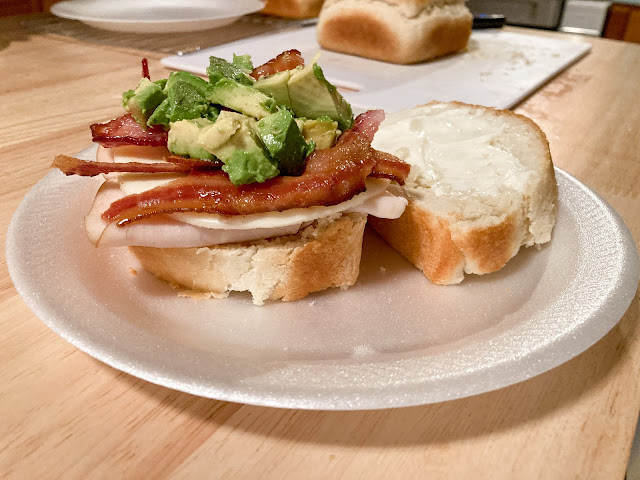 We chose to make sandwiches for dinner with this bread. Our sandwiches had turkey, bacon, avocado, provolone cheese, and mayo. Definitely tasty! A total hit with all the kids which is also a major win. 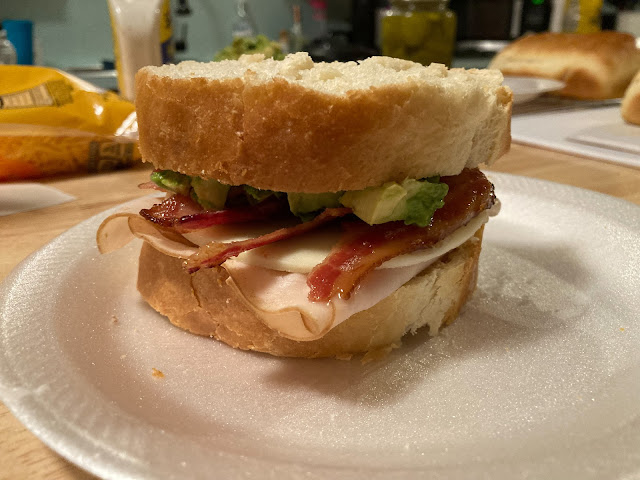 Time for some dessert, Lemon Bars! 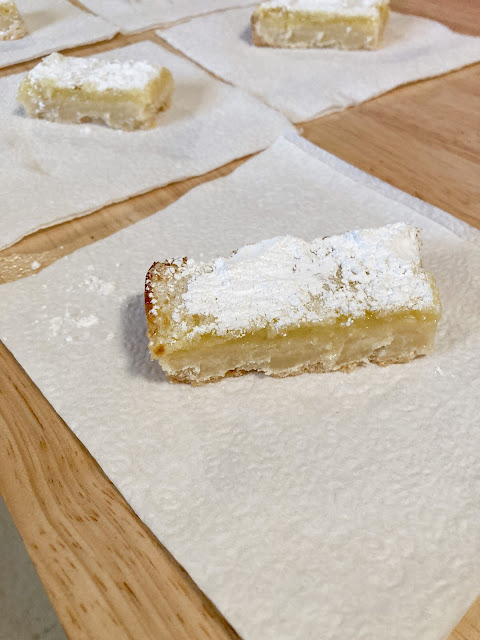 I followed this recipe: The Pioneer Woman Lemon Bars - Jen Around the World
Oh my goodness, talk about lemon bars for days! This recipe makes a 9 x 13 pan full of tart lemony deliciousness. This is my husband's new favorite dessert. I've always loved lemon bars, but had never attempted them before. 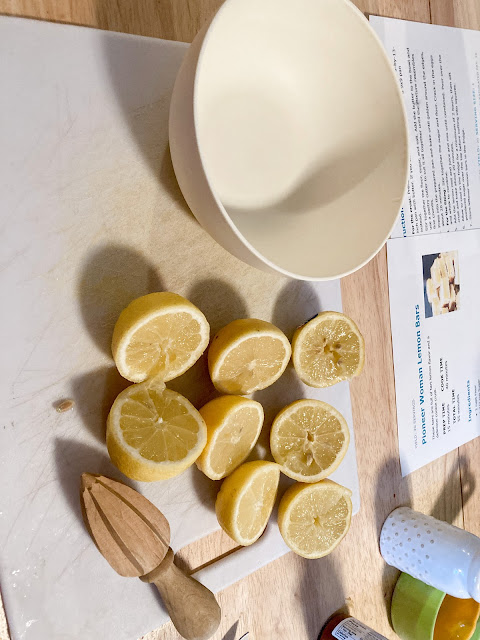 I used fresh lemons, but you could use bottled lemon juice if you prefer. This recipe was easy to follow and turned out fantastic. So much so that we made a second batch to share with our neighbors! 5 stars all around. The first time I made it, I used a hand mixer to mix the eggs and lemon mixture. This fluffed up the egg whites and we had a bit of an egg white crust when finished. This still tasted amazing, but the second time I whisked by hand and didn't have that problem! 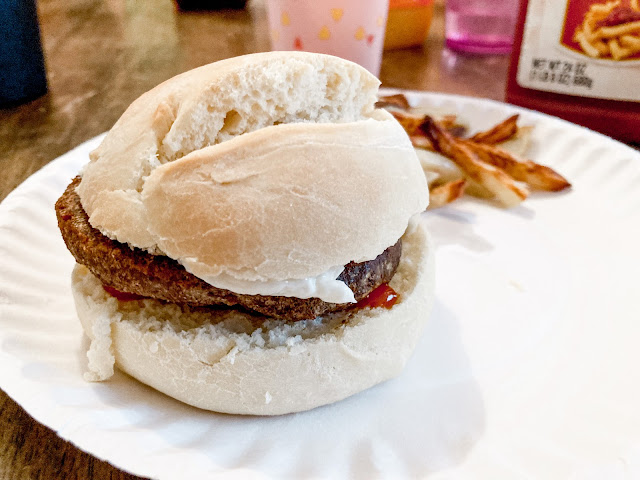 The recipe I followed can be found here: Hamburger Buns Recipe
I have tried a few different hamburger bun recipes, but this one is by far my favorite. I reduced the recipe to make 16 instead of 32 buns, but it is helpful to have that option for large family get togethers! 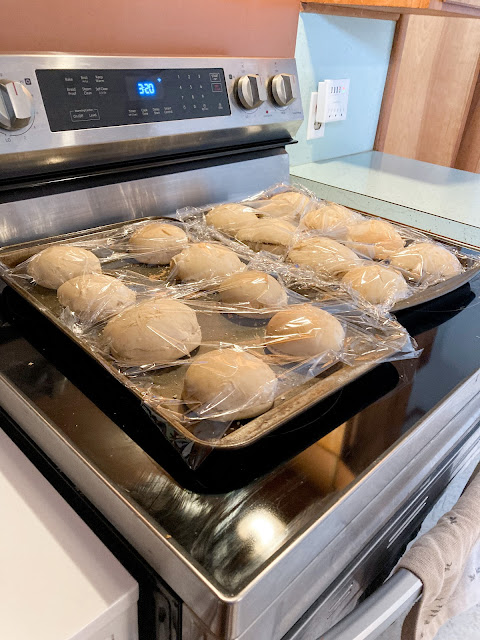 Some other recipes didn't have the dough rise, and I felt like it resulted in denser buns. These were very soft and fluffy. Everyone was really happy with them! We also made some copycat McDonald's French Fries in our Ninja Foodi using the air crisp setting. These turned out delicious!! 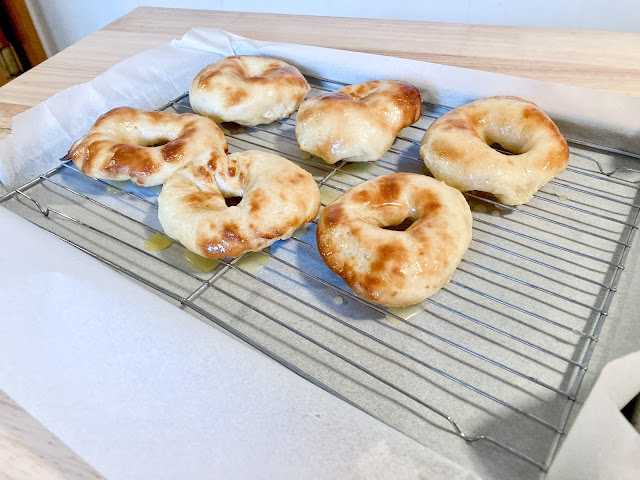 Here is the Air Fryer Donut Recipe I followed. As you can see above - they don't exactly look like the pictures posted on the recipe page! Haha. These definitely turned out pretty wonky, but they were still delicious. I'd love to try this again, and see if I can improve. I'm thinking that my oil wasn't evenly applied before these went in the air fryer. I also had a hard time transferring the donuts after they had risen into the air fryer without them becoming super deformed. If you have an idea of how to do that, please share! 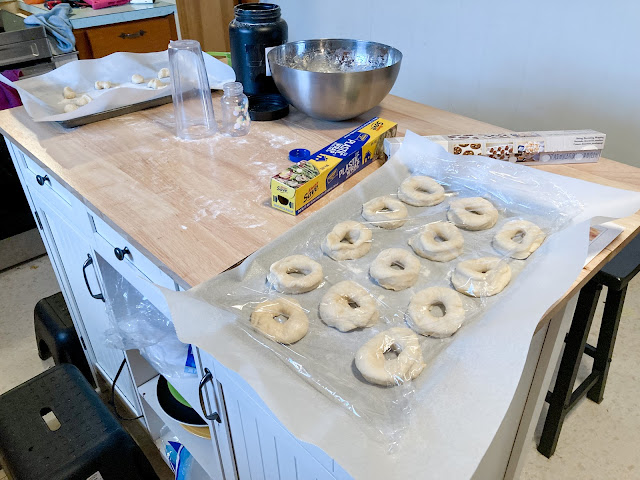 I rolled the donuts out by hand. I didn't even end up using a rolling pin, just smooshed them out. At the time I didn't have a donut cutter, I didn't even have biscuit or cookie cutters ha! So I used a smoothie cup and a baby bottle to cut out the donuts! Necessity being the mother of invention here. I have since picked up a donut cutter and am looking forward to trying it out! 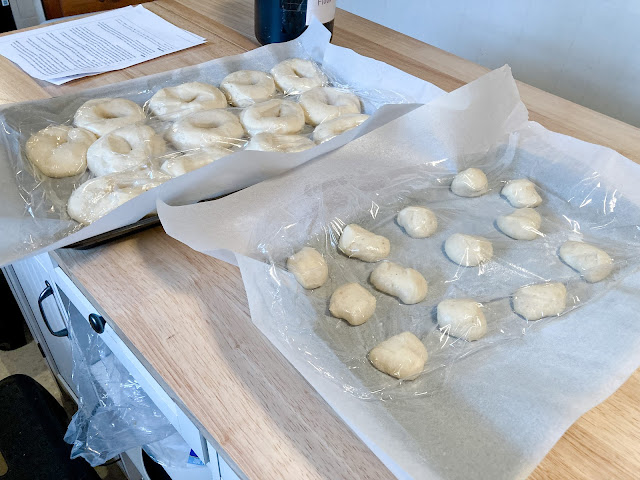 Below you can see the donuts after they have risen. They are quite fluffy, and deflated easily as I tried to transfer them to the Ninja Foodi. They fluff back up in the heat as they are cooking, but they were quite deformed in the end as you saw above. 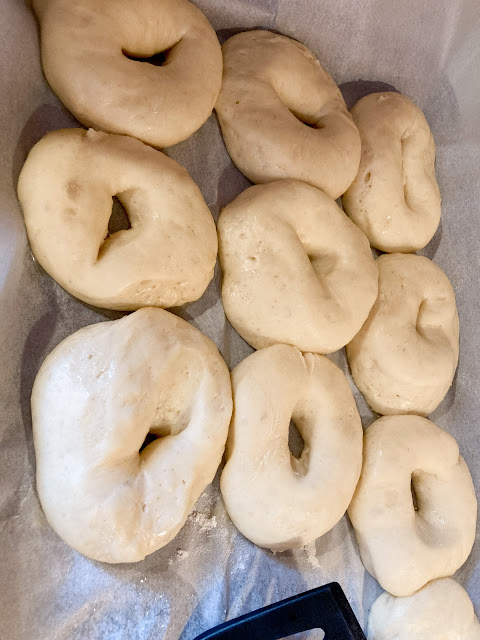 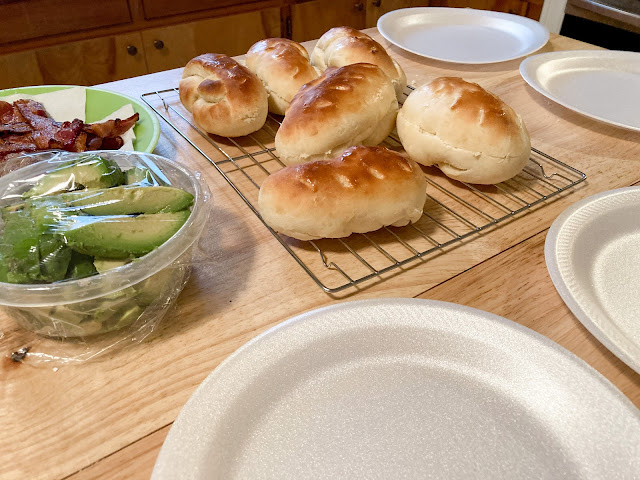 Homemade Hoagie Rolls recipe. I don't know what happened, maybe I couldn't shake off the donut fail, but I had a hard time shaping these hoagie rolls! The recipe explained it really well, and even stressed that they don't have to be perfect - but I must say I was bummed mine weren't as pretty. Delicious, yes. Pretty, haha not so much! That is ok though, I will definitely try again! This recipe also calls for a stand mixer, but can definitely be done by hand instead. 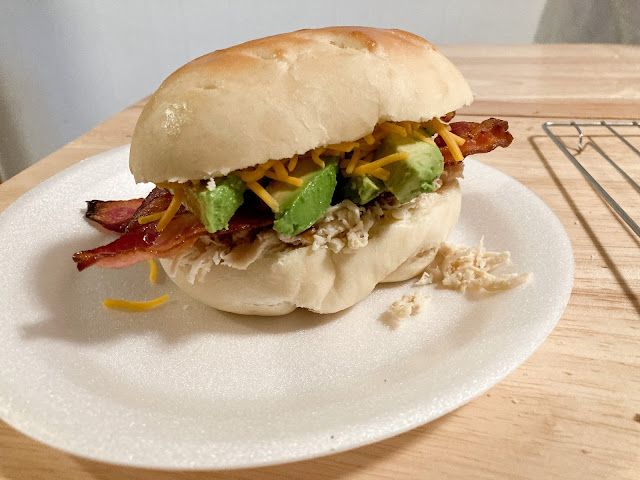 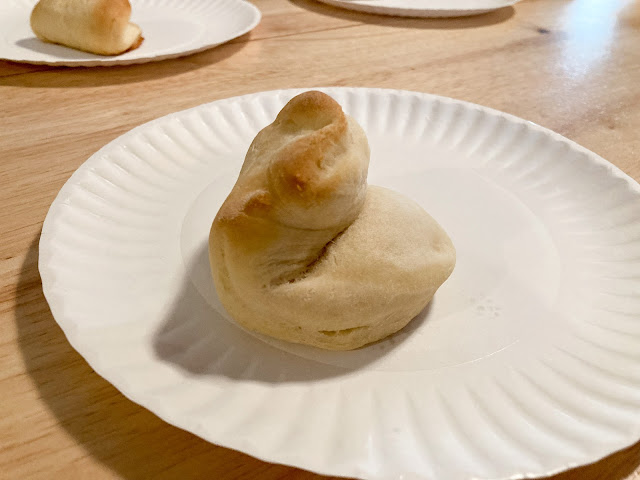 So I actually followed my grandmother's dinner roll recipe, which I am not going to share here. But, it is VERY similar to this recipe: Mom's Best Dinner Rolls . I think you'd get very similar results using that recipe! 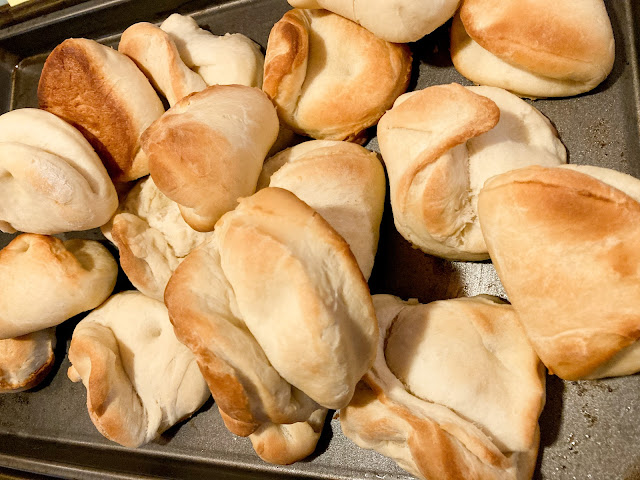 These rolls are always a crowd favorite. My Dad almost always made them for Sunday Dinner, and definitely for holidays and family gatherings. I remember my little brother trying to load up his plate with several rolls ha! 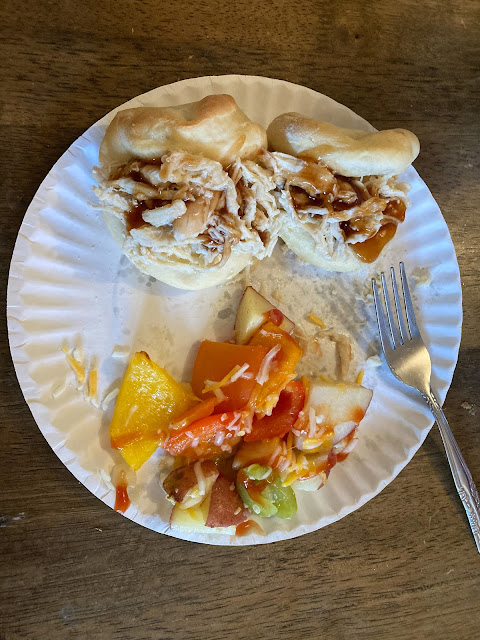 We often serve them as just a side, but this night we decided to use up some leftover shredded chicken and make pulled bbq chicken sandwiches with them. I also made oven roasted potatoes with red, green, yellow, and orange bell peppers as a side and it was loved by all. I think it will be a highly requested side that I will put in to our usual weekly meal rotations. The recipe I followed can be found here: Roasted Potatoes with Bell Peppers and Onions.

And Finally, A Family Favorite - Fatayer! 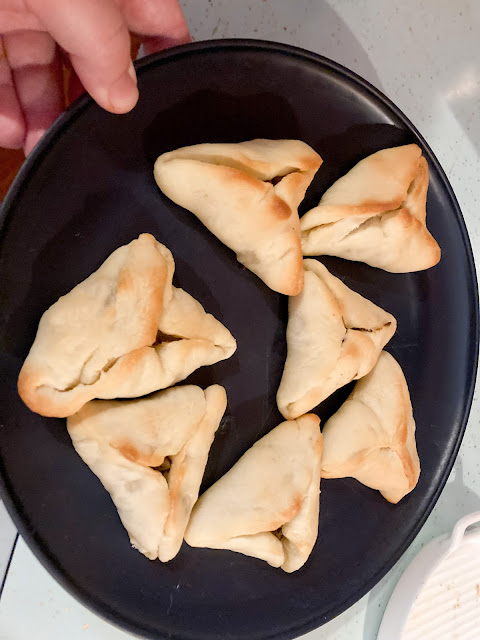 This is a dish I have made several times, many different ways. The first time I ever made it, or even heard of it, I followed Joanna Gaines's recipe. This recipe uses store bought biscuit dough, so this time I decided to try a more traditional dough recipe. I still used Joanna's recipe for the filling this time (as requested by my family), but used the dough recipe from this Lebanese Spinach Pies recipe. The dough made such a big difference! 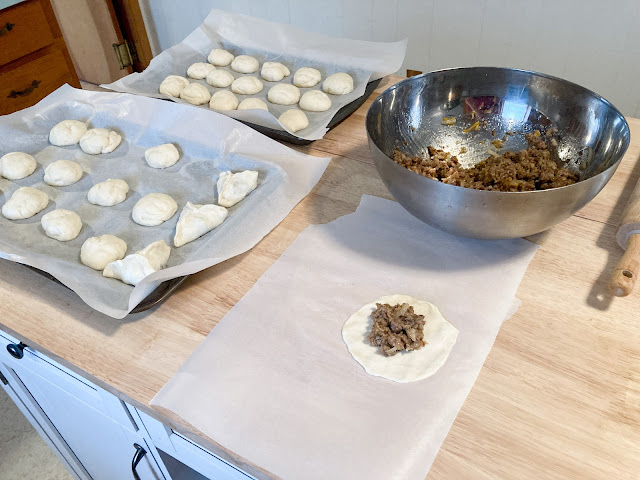 My family thought that this was definitely the best fatayer I've ever made. It makes a pretty huge batch. It was actually perfect, we had unexpected company that night and I was able to feed everyone! I also made the Lebanese Salad included in Jo's recipe. 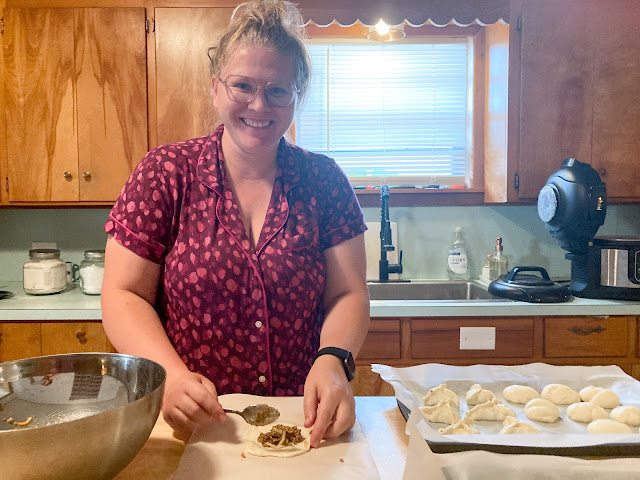 Fatayer is pretty simple. You make a circle with your dough, and fill it with a scoop of your filling. Ground beef, hash browns, onion, cheddar cheese, and salt/pepper in this case. 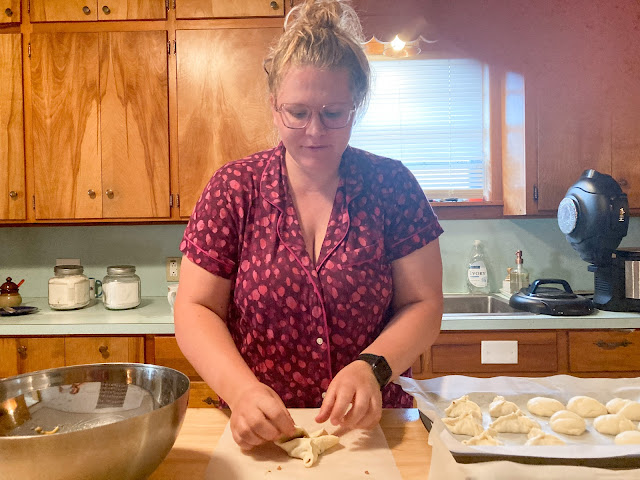 Then you pinch it together, creating a triangle shaped pocket. 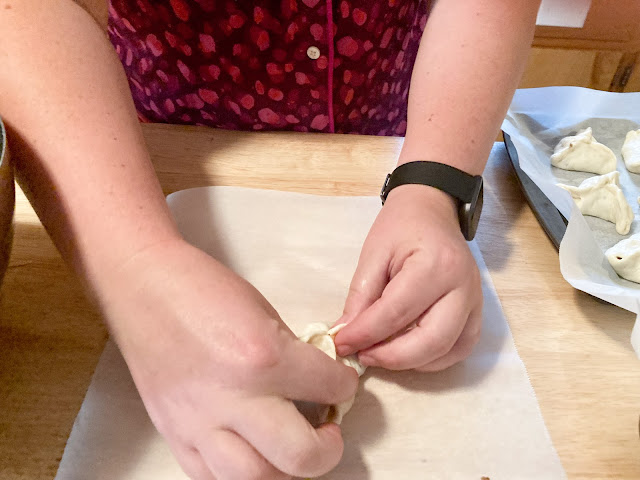 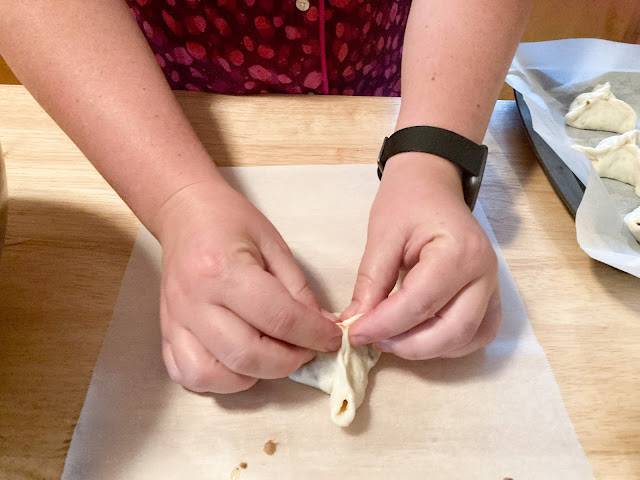 The wrapping of the filling in the dough worked so much better with this dough over the biscuit dough. It also tasted much better. It raises the effort level for the dish slightly, but it is definitely worth it in my opinion! 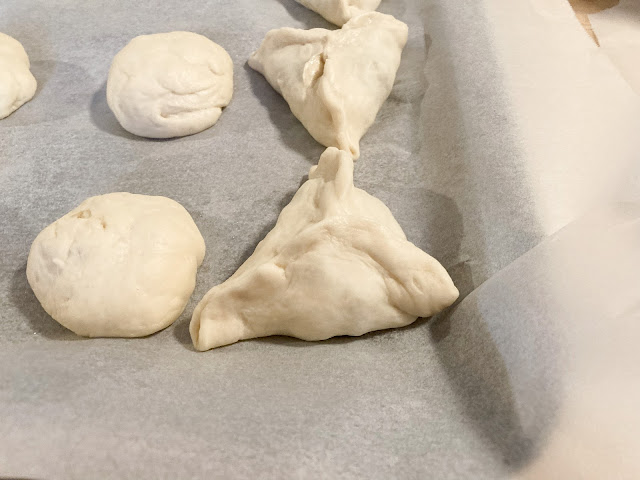 So there you have it, a round up of my week of baking. I don't normally spend this much time in the kitchen, and we just might be ordering out for the next week, ha! But seriously, this was really fun and appreciated by my family. While I did most of the work, I did have helpers volunteer throughout the process and it was a joy to spend time as a family in the kitchen. I will be putting effort in to making fun dishes more often.
You also might notice that yes I often bake/cook/prepare dinner in my jammies. Hashtag Newborn Life lol.
Do you enjoy baking or cooking? How often do you try new recipes?
Until next time!
Labels: DIY Food Home motherhood 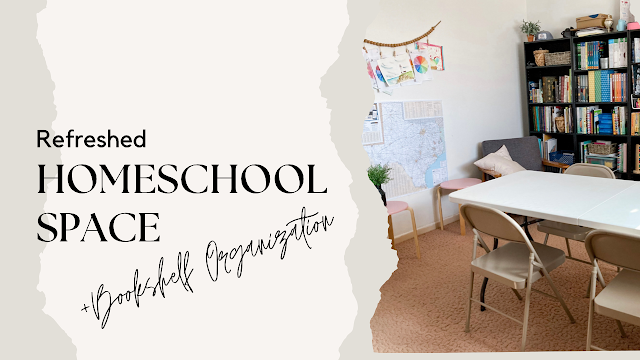 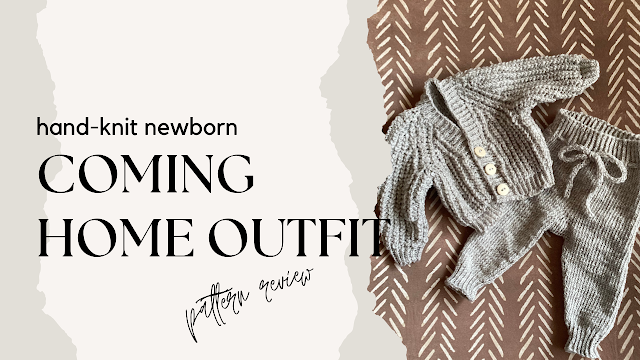